As I am doing some research for, you know.. reasons..

The surgeon, when trying to locate the correct spot for lead placement, is NOT listening for “misfiring neurons”. He is listening for the sound of the subthalamic nucleus, which is different than the surrounding tissue.

Here’s what every source has to say on the matter:

“Different areas in the brain have characteristic firing patterns, which means they sound differently when we listen to them.”

Note that he says nothing about being able to distinguish between the sound of Parkinsonian “misfirng” neurons and the sound of healthy neurons.

That’s because he can’t. Nobody can. Your STN sounds pretty much like mine. Which is unfortunate, because if Bill’s fabrication were true it would represent a definitive test to diagnose PD, other than autopsy.

And that’s what makes this such a weak, easily debunked lie. You don’t even need to drill into the brain to record the different patterns for different locations. If we could distinguish normal from “misfiring” neurons a lot of troublesome diagnosis problems could be solved with a test like a fancy EEG.

But the problems persist.

Cause Bill is a liar.

It’s been slmost five years since I first encountered Bill. At first I gave him the benefit of the doubt and accepted that he had PD — -a very mild atypical case, despite the fact that he had none of the really nasty symptoms.

The thing about atypical cases is usually the order in which the symptoms show up. The fact that a particular case involves primarily gait disturbance doesn’t mean they’re spared the others. They are just late to the party. If a person does actually have PD, and they live long enough, they can expect the complete package.

So I must confess that as I sat one day exchanging tweets with Bill, I had uncharitable thoughts. As he was actually bragging about how advanced and serious HIS PD was (and as usual, tearing through ten tweets rapid fired for each one I plodded through) I recall thinking “You pathetic pussy! You have no tremor, rigidity, bradykinesia, dyskinesia etc. yet you claim your PD is bad. STAGE IV?!? Just wait until your atypical case fills in the blanks, you get the full set of symptoms and you learn what Parkinson’s is really all about. THEN we’ll talk!” I figured a few years should get it started, if he really had PD.

Five years of watching his already mild symptoms disappear entirely(except for when he needed them, weaponized, for pity or to claim some privilege.)

BILL SCHMALFELDT DOES NOT HAVE PARKINSONS DISEASE.

I don’t care what he was diagnosed with years ago. Today, there is no way a doctor would say he has PD.

This is my honest and decently informed opinion and I stand by it.

I can understand why someone would believe Rick.

Here is a part of a comment in moderation left by Schmalfeldt:

1. I had more than one doctor who said it could not be possible that I had Parkinson’s because I was too young. When I was on the operating bed for the DBS surgery and Dr. Peter Konrad was marking the fact that it was easy to find the part of my brain that was misfiring, I said, “And to think a year ago, a doctor told me I didn’t have PD.” Dr. Konrad said, “I’ll send him a copy of the study results.”

The first sentence is intriguing.  One could reasonably imply that licensed medical doctors had no reason to believe he had Parkinson’s Disease. And yet, one doctor did.

It’s worth noting that Schmalfeldt combined the first sentence with the next one and often uses this tactic hoping you accept the logical leap that just because he was on an operating table for Deep Brain Stimulation, it proves he has Parkinson’s Disease.

If it was easy enough to just unscrew your skull cap and peak inside, you’d think with him being on the operating table they could see it without the autopsy.  The fact he even had a brain was probably a telling moment. Unfortunately, it’s not possible to prove Parkinson’s Disease unless you’re deceased and the coroner puts a new blade on the saw.

Still, even if you were to give him the benefit of the doubt and say a Parkinson’s Diagnosis is reasonable, the prognosis is the same:  You’re never going to get better.

3. Who said I went from Stage IV to Stage I? Other than you and your fellow lickspittles, that is? I am still Stage IV. That means something different to every person with the diagnosis. If you had a clue of what you are talking about, you’d know that.

It has a different meaning to EVERY person who has PD.  Even so, the disease moves from one stage to the next, not backwards. Ironically, he writes in a previous comment in moderation:

Then, explain why the people who treat Parkinson’s advise exercise as part of their long-term treatment of the disease. I admit, I did not do things I could have done for myself when Gail was well. But when I lost her, I had to fend for myself. The more I engaged in the world and did the things I needed to do, the stronger I got.

He admits he got better. He knows this which contradicts earlier statements he made during his feud with John Hoge while living in Maryland about the state of his disability. If he was truly disabled at Stage IV and required a caregiver, obviously not having a caregiver in Wisconsin is a factor in his improved abilities.  Or is it?

5. Why do you assume that I did not have physical therapy? I had three different rounds of physical therapy and speech therapy, all while Gail was alive. See? You made another false assumption,

The above statement supports that contention because while he was with Gail, he didn’t improve despite therapy.  Rick’s comment tells us that no one gets better. Exercise doesn’t get you out of the wheelchair once you’re confined to it.

But here he is: 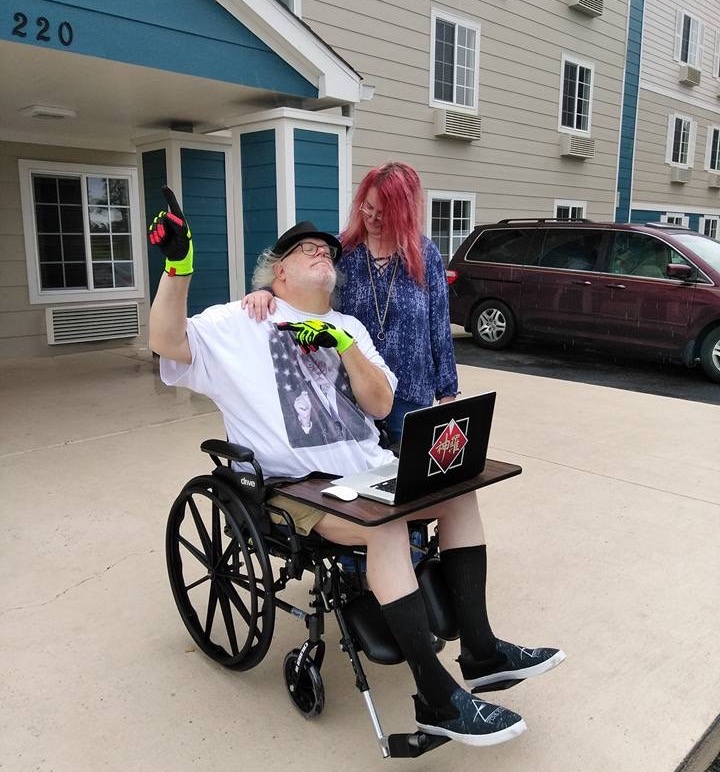 That’s why it’s called “progressive” and I don’t mean “liberal.”  It just gets worse, not better.  For him, though, all he needed to do was to fend for himself and get engaged with the world.

As far as driving, he makes this challenge:

Explain what you believe to be the reasons I gave up driving in 2009. Was it because I could NOT drive? Or was it because I noticed the impairment in reaction time and decided, as long as my wife was able to do the driving, that it was best to allow her to do so?

From 2009 to 2017, he didn’t drive because he couldn’t trust himself so his wife was allowed to drive him around.

Even the government agreed he had ADVANCED stages Idiopathic Parkinson’s Disease.

Here’s what WebMD says about the advanced stages of Parkinson’s Disease:

Advanced stage. Some people never reach this stage (Narrator: Bill claims to have reached it and convinced the government it is true). This is when medication doesn’t help as much and serious disabilities set in.

At this point, you likely:

Are limited to bed or a wheelchair
Can’t live on your own
Have severe posture issues in your neck, back, and hips
Need help with daily tasks

But in late 2016, he is able to get a license, buy a car and drive from Iowa to South Carolina and back. Twice.  Then he makes a video of how he’s going to travel America in 35 days and wants to collect donations for the $15,000 he estimates for the cost.

In an interesting twist, he writes this in another comment.

You are no longer permitted to tell lies about me or my condition. From now on, the rule for you to live by is if you can’t prove it’s true, don’t write it.

Funny.  He was the one that wrote about his condition and shared his life.  All I have done is shared what he, himself, has written.