I’m not sure that Climate Change is the real problem.

Over the past month, I have been working in Chicago at a client location.  This past Friday, students from schools in liberal cities across the globe gathered in metropolitan areas to share their grief that time is running out on saving the planet from the burning of fossil fuels. Here is the crowd I saw captured shortly around noon from the office window. 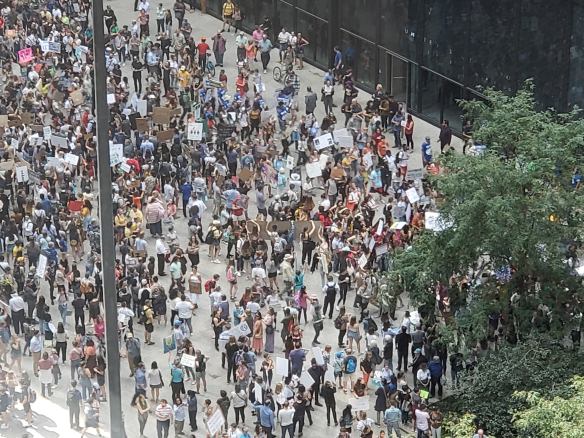 Every person in this picture has in their possession something derived or built from fossil fuels. They were transported to this place with gas or diesel burning vehicles.  In short, this mass of contradiction would not be happening without oil.

The big city liberals, however, believe that the system which gave us this incredible lifestyle is killing the planet. They tell us that we only have a few years left to turn things around.  Celebrities, climate activists, political opportunists and fraudulent scientists fly around in carbon pumping jets, chauffeured in gas guzzling SUV’s, and stand before these impressionable youths to virtue signal behind large PA systems plugged into the power grid where electricity is generated from mostly coal and natural gas fired power stations.

And at the same time, they tell us that unless we do something drastic right now, that the planet is doomed to burn itself up.

They actually have nothing to back up their doom and gloom prophesies.  They don’t talk about the facts; instead, they appeal to these kid’s morality that if you’re not on the side of the scientists, you’re an evil person. It doesn’t matter what happened in the past – the planet is dying and the kids need to raise their voices to effect change.

Geologists have shown the planet was much warmer in the past than today and supported a much larger biological ecosystem.  The North Pole has been without ice many times.  Antarctica was once a large green forest. And the planet has been through major climate upheavals. And still, life continues.  This is actual scientific fact.

Sadly, scientists have made many predictions over the last century about our use of fossil fuels and the climate. I’m old enough to remember them saying we will run out of oil before the year 2000.  Its almost two decades past that and humans are producing much more oil than ever before with proven reserves suggesting centuries of use.

Other scientists predicted that England would be without snow past 2010.  The North Pole was to be ice-free in the summer months by 2013. Stronger storms, larger wildfires, more droughts, and intense weather extremes were going to be the new normal after 2015. All because we love our oil.

Fossil fuels have completely changed humanity for the better.  The engineering and technological advances derived from the multiple applications of oil have spawned the development of climate controlled buildings, clean water delivery infrastructure, faster means of transportation, and the expansion of wealth to more people than at any time in human civilization.  Lifespans have doubled in the past two centuries. Nutrition has improved the quality of life for many around the world.  In short, the last century and a half has seen the world flourish.

The academics, however, aren’t teaching science.  Nor are they teaching history and the advances of humanity in the 20th century.  Alongside politicians, they are condemning our past, blurring social injustice, racial grievances and wars of the past with climate change as the true result of human modernization. This fear mongering to alter human advancement has caused young people to question their future.  In other words, they make useful pawns to affect political change.

The establishment has to do this; otherwise, how will they really be able to push their vision of socialism?  And since it’s unlikely for many of them to see their vision of society transformed before they are dead, they’ve decided to go after the most vulnerable in our society:  The children.

And here we have it – students in Chicago skipping school demanding that politicians and adults do something to stop the planet from becoming uninhabitable in the next few years – and oh by the way, let’s do this to stop social inequality and racism, too!  The liberals don’t seem to have any problem using young children to adopt their insane political philosophies. It is a means to the real end to transform our society to some kind of social justice democratic communism.

Fortunately, there is some hope.  This thread is worth the read.

I was a huge believer in Climate Change as a youth. I wanted to save the environment. Then I caught one lie. Then two. Then three. Then I read the current data. Then I realized they’ve been exaggerating & fear-mongering headlines for decades.

They are brainwashing the kids.

Sadly, the real problem isn’t that our climate is changing – its our national debt and relentless spending by politicians.  My prediction is that kids will have a much bigger problem on their hands in 12 years should they allow the democrats to take control -a sort of not-the-good kind of climate change.

1 thought on “About that Climate Strike”