Was it something I said?

Yesterday, I posted about FiFi’s weak sauce tweet asking me to comment on an April article about computer models projecting doom and gloom for island nations in the pacific.   He obviously read it because he went on a tweet storm which requires some fisking:

Funny how I can still get a dipshit and his circle jerk to step all over their own dicks.

And they're still wrong.

You asked me to respond and I did.  Why you mad, bro?

Willard Anthony Watts (Anthony Watts) is a blogger, weathercaster and non-scientist, paid AGW denier who runs the website https://t.co/JZaFMKIt0d. He does not have a university qualification and has no climate credentials other than being a radio weather announcer.

I never mentioned Anthony Watts, but this is typical of the snowflake left to change the topic when facts get in the way. In my years of debate in both high school and college, this is a concession – point to me.

One comment left by Dr. Mike was to suggest fifi go to Watt’s website.  Over the years, I have eaten a lot of popcorn watching the left become unhinged when Watts is mentioned and fifi didn’t disappoint.

"A scientific paper on the SurfaceStations project, coauthored by Watts (who did statistical calculations), came to the same conclusion as the Menne et al. paper, completely refuting one of Watts's main arguments."

So, Marvin, this non-scientist is your go-to guy?

Now it’s getting hilarious.  Fifi links to a 2011 article critical of Watts.  Seven years later, Watts’ blog is still in existence. Watts Up With That is one of the most visited scientific blogs on the internet for Climate Change.  Numerous credentialed and esteemed scientists and specialists write articles for his website. The scientific community engages in open discussion, something that doesn’t happen on religious climate alarmist sites.

And yet, this is bad?

As is typical of media weathercasters, Watts (a college dropout) has no academic training in the physics of climate or related disciplines.

Unencumbered by scientific expertise he works by intuition, and intuitively Watts could not bring himself to accept the documented increase in the U.S. surface temperature record.

Just so you know, Fifi’s quoting from Rational Wiki, a website run by leftists claiming to take on “pseudo science” and Watt’s biography is nothing more than links to articles critical of him from alarmists and often debunked websites.

In any event, it’s popcorn worthy.  Remember the first tweet where he says everyone is stepping on their cranks?  Does it still hurt when you repeatedly do it to yourself, Fifi? I’m guessing there is no feeling left.

Denier: "There has always been fires. Fires were more common in medieval times. Just because people have matches doesn't mean someone started this fire. It's just to keep FF's employed.

Someone needs to go back and understand how to build an analogy.  The stupid is strong with this one.

Here is an attempt to show how much he understands science.  Now he is a sea ice expert.. or something.

Love that he grabs a 2016 image and then picks some moment in time. Yeah, it’s 2016 so it’s completely relevant.

Here is a more recent chart.  The 2017 year is the black line. Notice those readings are higher than the 2016 line, since we’re picking time series.  The 2018 line is coming in lower, but it’s still higher than the 2012 all time low line in the almost 40 years of satellite measurements. 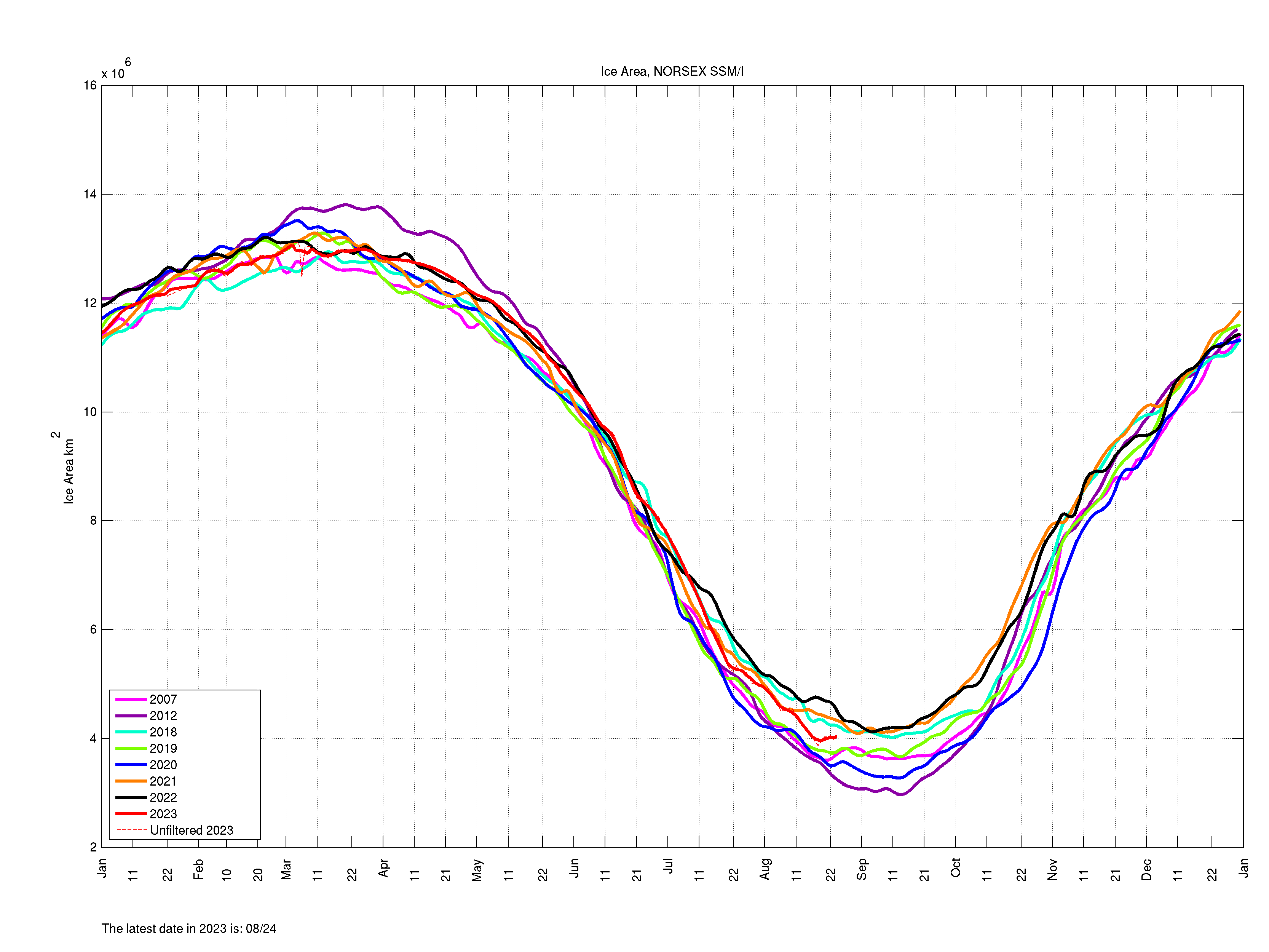 Someone who's never investigated climate change, who has vaguely heard that some people say it's a hoax or it's not that bad, and falls into the denier camp for no reason other than it suits their thinking is one thing

Once again, he attributes things to me I never said.  I’ve never made any statement that climate change is a hoax or is not that bad. Hilariously, he says I’ve never investigated climate change.

Funny.  When it comes to showcasing the science to back up his work, he uses out of date material.  My material is current and supports my arguments.  Another point for me.