Schmalfeldt is traveling to a new job and a new life. Last weekend, he let it be known to me on this site that he was upset at my First Amendment protected opinion, supported and fed by Schmalfeldt’s own words and writings, that he is faking his Parkinson’s Disease.  One of the statements he made was that he was trying to move on with his life and wants to forget that any of us “breathes.”

“All I want to do is move on with my life and forget you people ever drew breath. As long as you continue to make that impossible, you will have to bear the cost of continuing to tell these lies. “

Yesterday, he announced, on his publicly available twitter feed that he and his gamer resistance fighter were traveling west by bus for a new opportunity with the Veteran’s Administration.  Although he has not yet said where this is, he seems to want to believe this is making everyone upset. 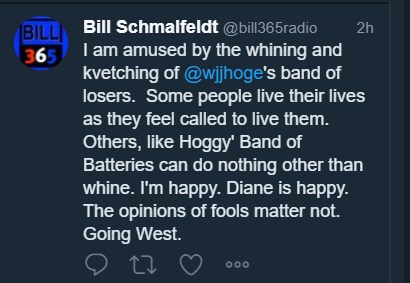 Poor Hoggy. His Band of Botherers is all angst-ridden over the fact that I am moving West, and sharing that information on my Twitter timeline. I guess I'm supposed to be hiding? It really bothers Hoggy's decreasing readership that I refuse to lay there and be harmed by them.

I should be a good sport, I suppose, and just lay there, taking their abuse as deserved with a penitent smile on my face. I choose another course, and if these nosey old Housewives don't like it I've got something they can suck on until they feel better. And it ain't a lozenge.

Ignoring for the moment his obsession with wanting to be gay, and the fact he is sharing space with unsuspecting travelers who know nothing of his fascination with doing grotesque things in a bathroom,  I don’t know of anyone who wants him to hide and are upset he is traveling.

Rather, we want him to stay in one place PRECISELY because he is genuinely offensive to the population in general and prayers go out to the other passengers who are probably getting whiffs of feces and urine near him.

More importantly, though, is the change, once again, from hiding to running away.  Cowards gonna cower. When people don’t act like he wants them to, he has choice words.

When he is suing people, and his service fails, he likes to call others “cowards” for not just running up to the US Marshal, giving them a hug and thanking them for delivering a legal pile of slovakian horse dung.

If he calls them on the phone and they do not answer, he wonders why they are afraid.

If we don’t allow his comments out of moderation, we are hiding something and obviously putting ourselves in deep peril.

And yet, when he runs off and hides after being humiliated in court, or by a John Hoge TKPOD, Prince FailDoxx believes we are being nosy.

So now he wants to start off a new life and is sharing it with the world.

If he is wondering why people like myself, John Hoge, and other members of Team Free Speech want to know where he is going is because the Lyin’ of Lebanon wants us to know. If he didn’t, he would have taken the advice so long ago to just disappear.  Even when he is silent, we know he is watching and where he is watching from.

So while he brazenly tweets his new adventure as an act of defiance, because he is a pinhead of monumental proportions, he fails to understand just how much he is sinking any future legal endeavors against myself and others.

I’m not one to educate the monkey, but let’s just say the farther west he travels .. oh, let’s just let him figure it out on his own. It’s much more entertaining that way.

17 thoughts on ““Even though I’m telling you I’m over here, I can’t believe you’re following me.””